Twelve | Eight in the Press

"As a band leader, Diali Cissokho has a commanding voice, and excellent kora skills; he is clearly a great composer with a visionary approach to the integration of other genres with his Senegalese roots. This album is up there with the groundbreaking recordings of Thione Seck, Baaba Maal and Youssou N'Dour."

‘Routes’ is "a genuinely and often beautifully syncretic evocation of a double identity that would be hard to match and impossible to duplicate."

‘Routes’ is "in its essence Senegalese but with a universality that translates beautifully across cultures."

“‘Routes’ is the perfect showcase for Kaira Ba’s unique fusion of Senegalese and American musical traditions, as well as a demonstration of cross-cultural collaboration and mutual respect between band members who welcomed an immigrant to their community.”

“‘Routes’ by Diali Cissokho & Kaira Ba is not just some clever experiment, it is an album of incredible music. Despite being a really wonderful example of cultural cross pollination, in the end you forget about all that and simply enjoy the sound of what they have created. From the heart-stopping drum and flute introduction to the album's closing song, "Night in M'Bour" to the simple beauty of "Saya", the album is full of magical moments. Listening to it is a joy from start to finish.”

With North Carolina-based bassist-ethnomusicologist Jonathan Henderson by his side, Cissokho laid down kora and vocal leads in his Senegalese hometown before the two flew back the U.S. to add parts from Stateside folk, jazz, and classical musicians, some of them members of Cissokho's North Carolina band and others not. In short, the kind of well-intentioned cultural crossover that normally turns to mush or treacle. But this moderately miraculous album remains both chewy and savory. From the string quartet that complicates the traditional opener "Alla L'a Ke" to the sabar drums and female backups that fill out the equally traditional follow-up "Badima" to the horn and string sections that bulk up the climactic "Naamusoo" and the bird tweets, indigenous flutes, and sabars again that introduce "Night in M'Bour"'s grand finale, a genuinely and often beautifully syncretic evocation of a double identity that would be hard to match and impossible to duplicate. A MINUS

"This album is up there with the groundbreaking recordings of Thione Seck, Baaba Maal and Youssou N'Dour." 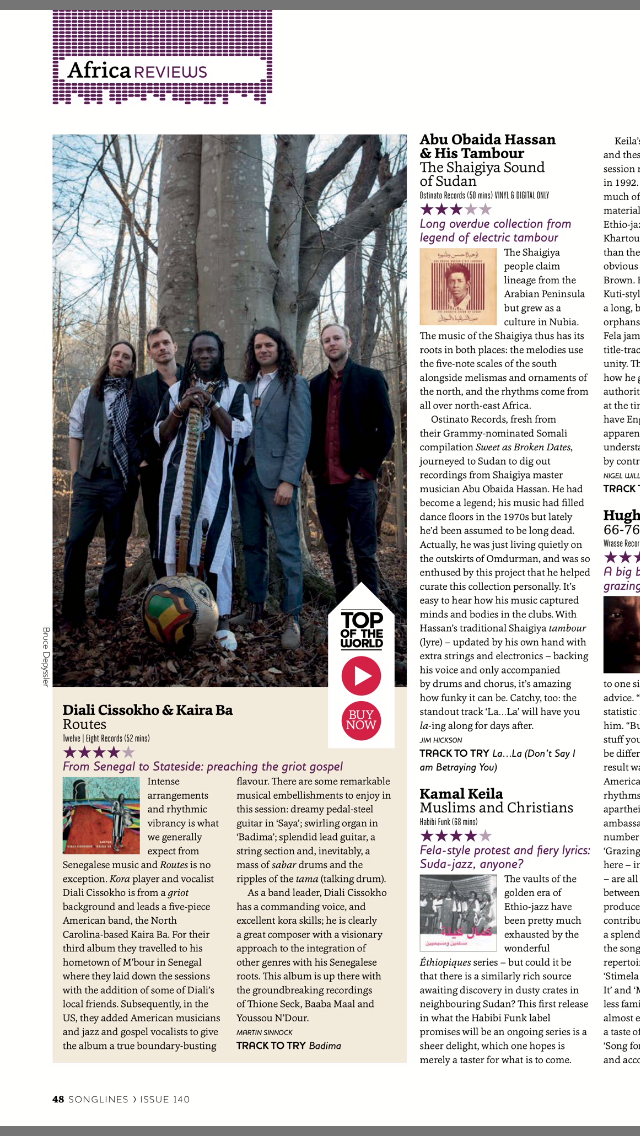 Intense arrangements and rhythmic vibrancy is what we generally expect from Senegalese music and Routes is no exception. Kora player and vocalist Diali Cissokho is from a griot background and leads a five-piece American band, the North Carolina-based Kaira Ba. For their third album they travelled to his hometown of M’bour in Senegal where they laid down the sessions with the addition of some of Diali’s local friends. Subsequently, in the US, they added American musicians and jazz and gospel vocalists to give the album a true boundary-busting flavour. There are some remarkable musical embellishments to enjoy in this session: dreamy pedal-steel guitar in ‘Saya’; swirling organ in ‘Badima’; splendid lead guitar, a string section and, inevitably, a mass of sabar drums and the ripples of the tama (talking drum).

As a band leader, Diali Cissokho has a commanding voice, and excellent kora skills; he is clearly a great composer with a visionary approach to the integration of other genres with his Senegalese roots. This album is up there with the groundbreaking recordings of Thione Seck, Baaba Maal and Youssou N’Dour.

Routes is anything but linear. It is more circular, recalling how Santiago in The Alchemist finds his treasure back home under the sycamore tree. Kora player and singer Diali Cissokho comes from a long line of griots and is the heart of this soulful and culturally collaborative album embracing both Senegal and North Carolina. Cissokho left his home in M’Bour, Senegal to follow his love to the American South and brought his music with him. It took time to find musicians in the U.S. who spoke his musical language, but eventually he found kinship among a quartet of Americans that form Kaira Ba, which roughly translates to “universal love.” The result is a new release, Routes, with Diali at the helm, making music that is in its essence Senegalese but with a universality that translates beautifully across cultures.

The album begins with the peaceful sound of cicadas in North Carolina on the first track, “Alla L’a Ke,” followed immediately by the sounds of a solo kora. It is so pleasurable and romantic to bridge space and time in this way with kora and cicadas heard inexplicably together. The final track, “Night in M’Bour,” ends with sabar drumming, children chanting the Quran at night, Diali’s nephew Mamadou performing on guitar, and woven into this scene are once again, completing the circle, the sounds of cicadas.

Diali and bassist Jonathan Henderson traveled to Senegal and erected a makeshift studio in a hotel room with the ocean as a backdrop in order to lay down the initial recordings for this album, which was later finished in North Carolina. Every track sounds effortless and expertly arranged to allow Diali’s experiences on both sides of the Atlantic to shine. “Badima” is a wonderful example of this, with authentic sabar drumming and electric guitar layered on top to give it a unique rock 'n' roll and mbalax groove. After a guitar solo, a Hammond organ surprises with a blues/gospel American feel.

Routes doesn’t shy away from the different genres that have influenced Diali. You get a little bit of salsa in “Salsa Xalel,” reggae in “Baayi Leen,” and elements of rock ’n' roll all the way through. Diali remarks on the seemingly unexpected salsa genre that “salsa is a big deal in West Africa. My dad listened to salsa and played it and danced to it. I knew it from my dad. When my dad didn’t get along with his wives, he would play salsa and sing to them. I’d listen to the groove and the melody, how he put his finger to the string. That’s how I got into salsa.”

The climax of Routes is undoubtedly “Saya.” It is a beautiful, soulful and mournful song written by Diali after his mother passed away. It consists mainly of Diali’s soaring and textured voice and gentle kora accompaniment. The band enhances the sound with a thoughtful arrangement of soft percussion, a tender bass guitar line, and an absolutely breathtaking pedal steel guitar played by Eric Heywood. This track epitomizes Diali's vision and musical process. He explains, “Our instruments had to talk to each other. They had to follow my key, tune into me. I didn’t know how to explain. But then they heard the melody, and they tuned to me. I started to believe, O.K., it’s coming. I didn’t lose my music from back home--it’s always here with me. We spoke a different language. But music, as my dad would say, music talks.” Diali seems to have struck gold by staying true to his roots while finding musicians to communicate with on his route back home.

Global A Go-Go Review of Routes

North Carolina has become an exporter of top-shelf West African music in recent years. The trend started with Asheville’s Toubab Krewe, followed shortly by Diali Cissokho & Kaira Ba from Carrboro. Singer, percussionist and kora master Cissokho is the scion of a griot family from Senegal’s Casamance region. When he moved to the Research Triangle in 2009, he quickly connected with a cohort of open-minded musicians with backgrounds primarily in jazz and rock. They’ve absorbed the centuries-old traditions that are Cissokho’s birthright, added their own ingredients to the stew, and on their third album they continue to bring in new flavors: tracks 1 and mbalax-inflected 10 feature imaginative string quartet arrangements by bassist Jonathan Henderson, 8 pairs gospel singing and organ with an Ali Farka Toure-style blues, and 6 starts in a classic Mande mode before shifting into a modified reggae rhythm over which guitarist John Westmoreland lays a jazzy Wes Montgomery-like solo. All this may sound a tad too eclectic, but the band never loses sight of the music’s ancient roots and earthy pulse. A most impressive album.

Anchored by the kora and vocals of griot kora player and singer Diali Keba Cissokho, Kaira Ba has created a singular cross-cultural statement with their 2018 album Routes.

This album builds a bridge across the Atlantic, connecting worlds thousands of miles apart but intimately bound by a shared history. Over the course of two years, Diali Cissokho & Kaira Ba recorded Routes in North Carolina, USA, and in M’bour, Senegal. The collaboration grew to include 35 musicians, each of whom listened deeply to the others in this musical conversation. Sounds of Senegal intertwine with those of the U.S. South -- sabar and soruba orchestras, tama (talking drum), balafon, and fula flute weave through gospel organ and pedal steel, sax, trumpet, trombone and string quartet – musicians calling back and forth across continents, drawing each other close though an ocean away.